By VT State Parks - August 18, 2012
Nearly 80 years after young men from the CivilianConservation Corps (CCC) constructed what is now Coolidge State Park, a new group of young people from the National Civilian Community Corps (NCCC) is once again working at the park in Plymouth, VT. 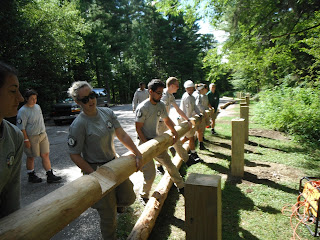 The eleven-member NCCC team, based out of the national service program’s Atlantic Region headquarters in Perry Point, MD, has constructed a 600-foot long fence along Coolidge State Park’s main road.  The fence will prevent traffic from entering recreational areas where children play. It is a continuation of an NCCC project from 2009, when the park’s visitor center was constructed with the help of a different NCCC team.

The log-railed fence has been constructed much like the park’s iconic log lean-tos and picnic pavilion constructed by the CCC in the 1930s.  The NCCC team, Moose 2, spent three weeks peeling spruce bark by hand, and cutting and setting 20-foot segments of the fence.

Like their predecessors in the CCC, much of the work for the AmeriCorps members was done using only manpower, sometimes taking all eleven teammates to haul a single log into place. 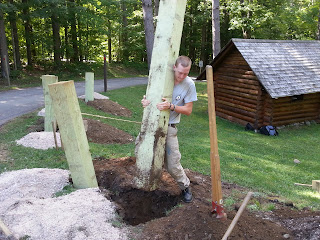 Nineteen-year-old Corps Member Elizabeth Peterson of Coal City, Illinois, said she enjoys this project because of its connection to the CCC, which put young men to work in national parks and helped stimulate the economy during the Great Depression.

“The history of the CCC is really interesting and those guys helped make Coolidge Park what it is today,” she says.  “I feel like AmeriCorps is a similar program, and I’m a part of a new generation that wants to contribute and build up communities.”

Moose 2 will be working with Vermont State Parks until August 29. Once the fence project is completed the team will also assist clearing brush from campsites and trails. 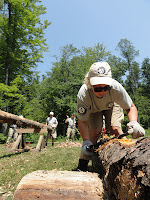 The team is also working with Charity Treks, a weeklong bike race running through northern New England, from which all proceeds go to HIV/AIDS research and awareness.  The team is setting up rest areas and check points for bicyclists from Vermont to Maine.

AmeriCorps NCCC is a full-time, residential, national service program in which 1,100 young adults serve nationwide each year.  During their 10-month term, Corps Members – all 18 to 24 years old – work on teams of eight to 12 on projects that address critical needs related to natural and other disasters, infrastructure improvement, environmental stewardship and conservation, energy conservation, and urban and rural development. 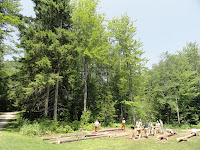 The Atlantic Region campus in Perry Point is one of five regional hubs in the United States and serves fourteen states in the northeast part of the country.  The other campuses are located in Denver, Colorado, Sacramento, California, Vicksburg, Mississippi and Vinton, Iowa.

In exchange for their service, Corps Members receive $5,550 to help pay for college, or to pay back existing student loans.  Other benefits include a small living stipend, room and board, and leadership development.
AmeriCorps CCC Coolidge NCCC Vermont State Parks