Showing posts from January, 2012
Show all

Enter our Cabin Naming Contest and Win a Free Stay 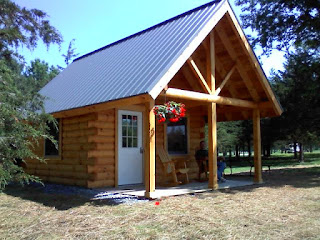 Four new campground cabins will be ready for use in Woodford State Park starting this spring, but right now two of them are nameless. So, we're having a cabin naming contest! The cabins have to be named after native Vermont flowers. So, all you have to do is tell us which flowers we should choose and why! The other two have already been named Gentian and Trillium so all other flower names are available. Send your entry to: parks@state.vt.us with "Cabin naming contest" in the subject. In the email include your name, address, and your names and explanations by March 1, 2012. You can also mail entries to us at 103 South Main Street, 10 South, Waterbury, VT 05671. The lucky winners will be announced mid-March. As their prize, they will able to stay for two nights in their named cabin, and we’ll also post a framed write up and photo in the cabin all season! You can make history and decide what these cabins should be called – forever! Good luck and let the "Names
14 comments
Read more 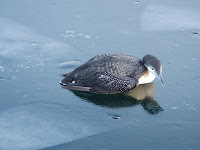 Bob Dill shared a first hand account of a unique sighting (and rescue) yesterday through Vermont Birds Listserv. We'd like to share his tale: Bill and a friend, named Phelps, were ice skating off Sand Bar State Park yesterday and soon spotted a distressed red-throated loon on the ice of Lake Champlain. The ice was inhibiting the bird from taking off; it was too slippery. They came ashore for advice and more equipment. After several calls, they finally got a hold of Carol Winfield in Westford who walked them through how to capture, transport, and release the loon safely. The two men borrowed an extra car coat from a neighbor of Phelps' who happened by at just the right time and skated back out to the bird. Luckily, the capture was straight forward and went off smoothly. The loon was walked back in rather than skating to reduce the risk of falling with the bird. Bill and Phelps took a short drive to a bridge where rocks near the bridge were free of ice, allowing easy acces
Post a Comment
Read more 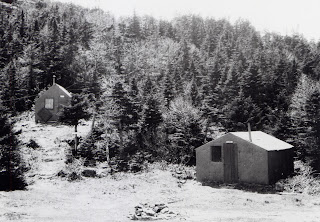 Tin huts on Camel's Hump clearing We get questions of all kinds in our reservation call center, many relating to the history of certain land parcels. We're always amazed by what we learn, and thought you might be interested in this one:﻿﻿ A person wrote to us about the restoration of Camel's Hump as follows: "I came across some old photos of tin huts on the upper portion of the mountain that were used by hikers and, I guess, maintained by the GMC back in the 1920's and 1930's. I understand that those intrusions have since been removed and wonder if you can tell me when this laudable action took place?" Gary Sawyer, Stewardship Forester for the Vermont Department of Forests, Parks & Recreation is my go-to guy for all things Camel's Hump. He knows everything about 'The Hump'. He sent some photos and this reply:﻿ Camel's Hump hotel ﻿ During the mid to late 1800’s, into the early 1900’s, it was quite popular for folks from ‘down-
3 comments
Read more

A Loon Rescue, a Bird Attack, and Rare Spottings 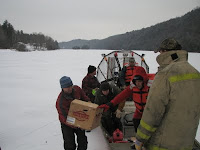 The loon rescue using the new airboat Loon enthusiast and VT State Parks Program Host, Eric Hanson, took part in an exciting loon rescue just before the new year. Eric posted the following story on his blog for Vermont Center for Ecostudies : A wounded loon could not take flight from his home in Lake Eligo, (Greensboro, VT) when it began to freeze over. This little bird endured a week of less and less open water while fending off bald eagle attacks until his hole finally froze over completely. Vermont Fish and Wildlife Dept. Game Warden, Russ Shopland, came to the rescue using a newly acquired airboat to scoop up the injured loon. (the rescue team took this opportunity to do a practice run of a thin ice rescue) The loon during recovery in Eric's bathtub After the rescue, Eric nursed the loon in his bathtub, feeding him minnows while his wing was healing and sent us the following update: The loon had an old break in his wing as an x-ray from Lamoille Valley Vets sho
Post a Comment
Read more
More posts