A Day in the Life of a Park Ranger: Map Turtle Edition

As a park ranger, you see some unusual things. Take last Friday, for example...it was a beautiful, warm, sunny day at Niquette Bay State Park in Colchester. The sun was low in the afternoon sky and the sand on our south-facing Lake Sand Beach radiated warmth after baking all day under the sun’s rays. I didn’t see her right away, but, as I neared the prime spot on the beach, there she was…a lone park visitor, basking in the warm sun, with her toes buried in the sand. As I approached, I realized…..she was laying eggs! 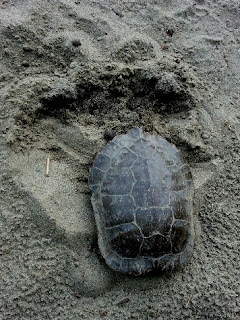 This wasn’t just any park visitor, it was a Northern Map Turtle.  Map Turtles aren’t endangered in our state, but they are a species of special concern, which means they are ones that we want to keep an eye on.  Map turtles are in a few lakes besides Lake Champlain, but Lake Champlain is the mother lode.

Map Turtles live in the bottom of rivers and lakes, where there are places to bask on fallen trees, and they highly prefer unshaded sites with sandy soil in which to nest. With the Park’s sandy beach adjacent to an undeveloped natural area of Malletts Bay, Niquette Bay State Park had just what this visitor was looking for. Lake Sand Beach natural communities are also uncommon in Vermont, with most of them having been developed as recreation areas or private homes. (Vermont’s largest remaining Lake Sand Beach, along with its most intact natural dune system, is protected at Alburg Dunes State Park.)

Within 90 minutes of my encounter with this park visitor, she had completed her labor and was long gone. After laying eggs and covering the nest using her hind feet, a mother turtle's responsibilities are complete. Now, it was up to nature to take its course. Left undisturbed, the eggs would hatch in about 70 days, depending on the weather. The problem was, this female turtle chose the spot on the beach that was the busiest of all for all of the other park’s other visitors; dead-center and right next to a picnic table.

Although turtle nests can be quite inconspicuous, especially in sand after it’s been gently washed with rain, this one was poorly placed for survival. Quickly, Park Attendant Megan Kane and I constructed and placed a small cage and sign to protect the nest from disturbance.

Turtles choose their nest sites carefully, relying on 200 million years of finely honed instincts. Nests should only be moved in extreme circumstances by experienced and trained people. Fortunately, I was able to reach one of those people after 5pm on a Friday. Steve Parren is the Coordinator for the Wildlife Diversity Program of Vermont’s Fish and Wildlife Department. After describing the next location and the species of the turtle, Steve agreed that the nest’s best chance of survival was to relocate it from the busiest part of the beach to another section that was not frequented by people.

The following Wednesday, Steve came to the park to help. After removing the wire cage, he very carefully removed the sand a little at a time using a paintbrush so as not to break the eggs, uncovering sixteen eggs in total. Map turtles typically lay between six and twenty eggs, each one measuring approximately 1.25” long, in a cluster located 4-5” beneath the surface.

During early development, rotating the shell may impact the turtle’s development, so the eggs must be handled very carefully and placed in the new nest location with the same side facing up as they were in the original nest. Steve delicately laid the eggs on a bed of sand in a bucket, then carried them to a new location a little farther up the beach. The new location was the same environment as the original nest, but less developed as an active beach area where human park visitors don’t often venture. After placing the eggs with care in the new nest, with the same shell sides facing up just as they were in the original nest, we carefully covered the nest with sand, and wished the baby turtles well.