Notes from Maidstone: Events from the Weekend of July 21-22 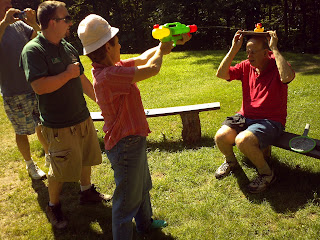 This past weekend, in addition to our regularly scheduled Friday Night Open Mic Campfire Night, Yoga, and Saturday movie night, we also hosted out own version of the 1980's hit Nickelodeon television show Double Dare and also a loon/rock art program. Our Double Dare event was intended for all ages and involved both trivia and challenges. Each team was asked a trivia question (relating to VT and nature) ans should they be correct, they were safe, those who were wrong had to carry out a physical challenge. The physical challenges included things like, tossing and catching water balloons in a colander that the teammate held over theri head and tossing wet sponges from one teammate to the other in order to fill a bucket to a certain line. Everyone involved recieved prizes, but the winner recieved a free pizza donated by Bruno's Wood-fired pizza on the west end of Maidstone Lake. 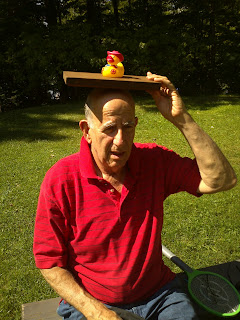 The loon/rock art event was also a weekend hit. Those who have made their way to Maidstone know about the rock loons that line the road that lead to . If you don’t know, a local hobbyist makes these and more in his spare time. He was kind enough to donate pre-made, unpainted loons for a lucky few to paint and take home. This event was supplemented by an educational piece relating to loons and loon preservation efforts.

Although the end of the season is just around the corner, we are working diligently to bring about more quality programming that both entertains and educates park guests.  So come out and join us soon.