Check out this video of Grand Isle made by two local students! Then scroll down for more information about the creators. 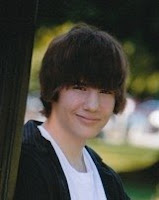 My name is Sam Ashton. My hobbies include making videos, playing video games, and drawing. I have come to realize that I desire a career in film making. My primary goal is to become a director, but if that doesn't go well, I want to be involved with film making in any way I can. I am a fun loving guy who enjoys a variety of movie genres, like action, sci-fi, horror and comedy. Together with a few friends of mine, we create videos for fun that are either special effects or comedy. When we were asked to think of a community service project, Marty proposed we do a video for the Dept. of Forests, Parks, and Recreation. I thought it was a great idea and that it would be fun. It was fun, and I enjoyed every bit of it. It was one of the first videos done for someone else that was more serious and it came out great.

I'm Marty Tobin. I enjoy playing video games, watching a variety of films, and making films, and I plan to attend college for film making in order to become a director one day. When told that we needed to come up with a community service project, I thought that calling the state parks could be a fun project. When I called and talked to the Sales & Service Manager, she offered the idea of making a movie, which sounded like a great idea to me since I love making videos so much. I found that it was a great project to work on, since most of the videos Sam and I had done had been more comedy oriented videos. It was nice to try working on a more serious video, and I was pleased with how it came out.