Bridging the Gap: A Legacy of Stone Work 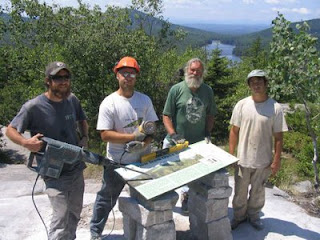 For two weeks this July the Vermont Department of Forests, Parks, and Recreation’s seasonal State Trail Crew marveled at the work of the Civilian Conservation Corps. (CCC), not as observers, but as those who were bridging a 75 year gap. All the projects that the crew is undertaking this summer are in some way linked to the spirit of the CCC, but none as directly as installing an interpretive panel on top of Owl’s Head Mountain in the shadow of the intricately built stone hut.

Owl’s Head Mountain is situated in the heart of Groton State Forest. It’s 26,000 plus acres, riddled by trails and specked with State Parks, makes Groton State Forest a gem for recreating and enjoying the outdoors. Driving down Boulder Beach Road, as you near the entrance of Stillwater State Park, your eyes are drawn north by the view and little imagination is needed to understand why Owl’s Head was given its name.

In 1935 the CCC completed building a crown for the top of this haystack shaped rock. Many say that the granite which comprises the mountains and was dropped by glaciers across the landscape is the forests second most bountiful resource, others scorn their presence. They are likely the number one reason that the forest was not developed and hence turned into State Land. The granite is also a building material that lasts the ages. These are two major pluses for the rock. The down side is it is heavy and hard to work with. These challenges were over-looked by both the CCC and the State Trail Crew.

For five years interpretive information has been developed for Groton State Forest. This interpretive information was developed and fabricated on signs placed in strategic locations throughout the forest giving visitors a better understanding of their surroundings. The last stage has been the installation. Great effort has been taken to match the structures holding the signs with their surroundings. When deciding on the material to use on top of Owl’s Head it is almost obvious that it should be rock. When you crest the mountain the first thing you see is the stone hut, then with further observation, hidden in the brush you can see the cast away rock that did not fit into the puzzled together hut. These cast-a-ways bear the scars of the drill bit, making it very apparent that they were being manufactured for a purpose. After sitting for 75 years we decided to complete the circle and use them to create a holding structure for our interpretive panel.

The crew consisting of Owen French, Andrew Pinault, and Alex Kopista went to work under the heat of the sun and the all too often drenching down pour of the summer rains. Rifting lines across the granite rocks to loosen up the granite’s speckled particles with shock waves given off by the hammer’s ridge line. Hammer hit after hammer hit ponds a memory into the rock making it easier for the crew to split it. Then along this line drill holes, usually a half inch diameter were placed approximately six inches apart, deep enough to insert the feathers and wedge. The feathers are two pieces of metal that the wedge pushes against in order to put pressure on the inside of the drill holes causing the rock particles to release their bond along the line that is rifted. This is the method that was used to manufacture the rock into the needed shapes, a method that has not changed much since the CCC split rock on top of the same mountain. Once the rock was the right shape the crew drilled through the center of them and skewered them along pieces of one inch diameter stainless steel rod, pinning the columns to the bed rock next to the stone hut. Then a fabricated metal bracket was bolted to the columns allowing the interpretive panel a place to be bolted to as well. For the last three days of the project the crew would wake up at the campsite feeling that today would be the day, the project would be wrapped up. Each day unexpected challenges would arise until the last bolt was tightened and the crew member’s tired muscles carried them away from the creation to allow a look at the finished product: a holding device that matched the character of the stone hut, would withstand the test of time, and would hopefully make the CCC proud.
CCC Groton